Bears are licking their chops as Bitcoin price tightens, setting lower highs below $9.3K so far in November, the biggest performing month for BTC historically.

So far November has started off as a relatively uneventful month for Bitcoin’s (BTC) price action but all of this could change before the weekend is over. Let’s take a quick view of the charts to see what is in store.

Outside of setting a weekly high at $9,616, the price continues to trade in a tightening range, capped beneath the weekly resistance at $9,616 and supported at $9,100. The past 5 days have set a pattern of daily lower highs as trading volume is nearly grounding to a halt. 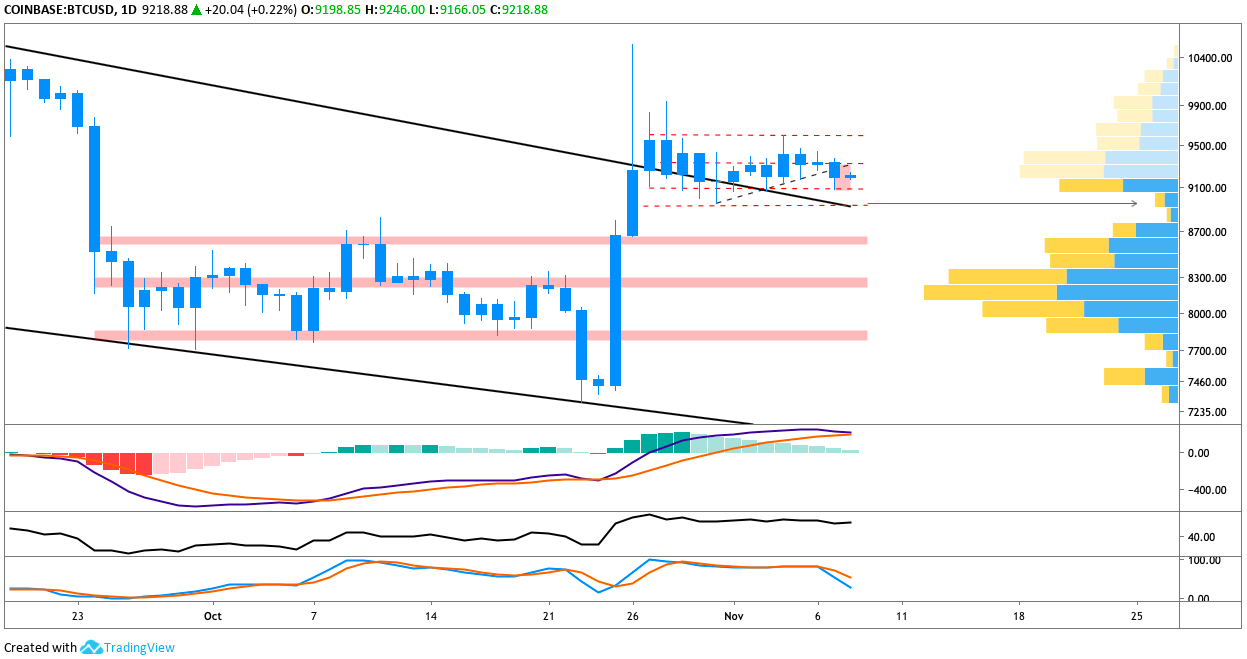 On the daily timeframe, Bitcoin price is pulling closer to the 20-day moving average (DMA), which lines up with a volume gap on the volume profile visible range (VPVR). A drop below $9,100 could see the price fall to $8,950 where buyers could show some interest.

If buyers fail to buy into the dip the price could sink to $8,600. If $8,600 does not induce buyers then $8,300 could be the next stop for Bitcoin price as there is clear support here.

Traders looking for reasons to go short will notice that the MACD is about to roll over and the shrinking green bars on the MACD histogram correspond with the decrease in trading volume. 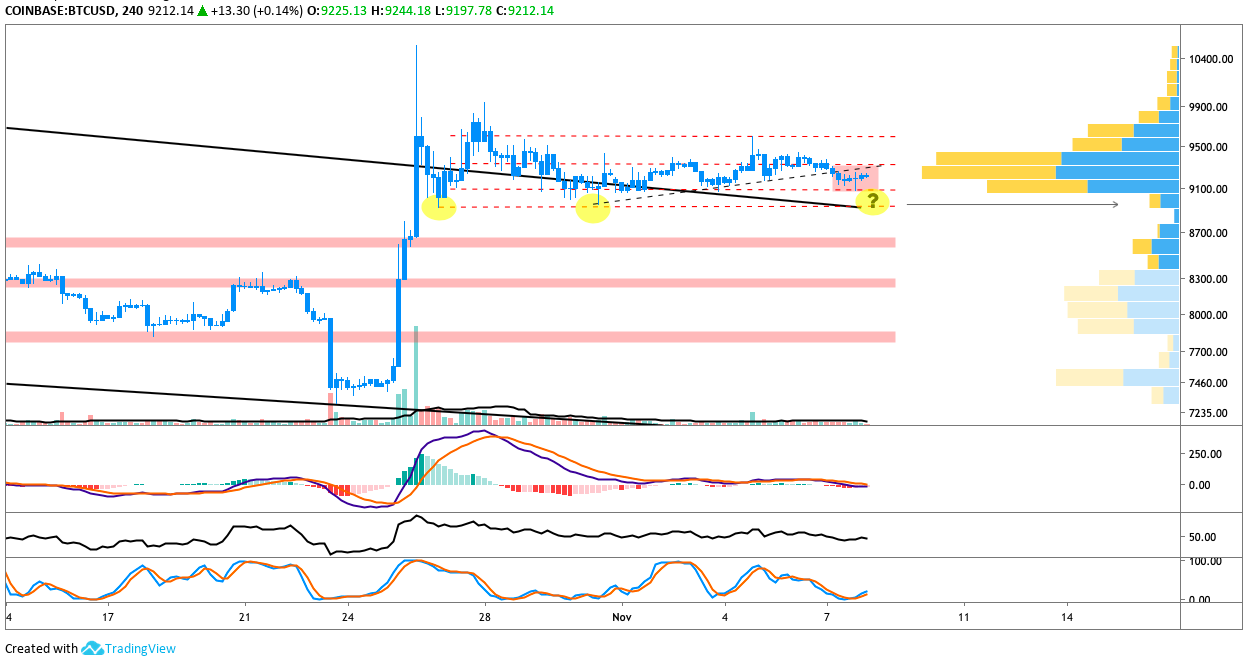 The 4-hour chart shows that Bitcoin has been stuck beneath $9,250. But while bears are probably looking to short $9,300, there is still the possibility of a breakout. The 4-hour MACD is pulling up towards the signal line and the relative strength index (RSI) is also working its way toward 50. 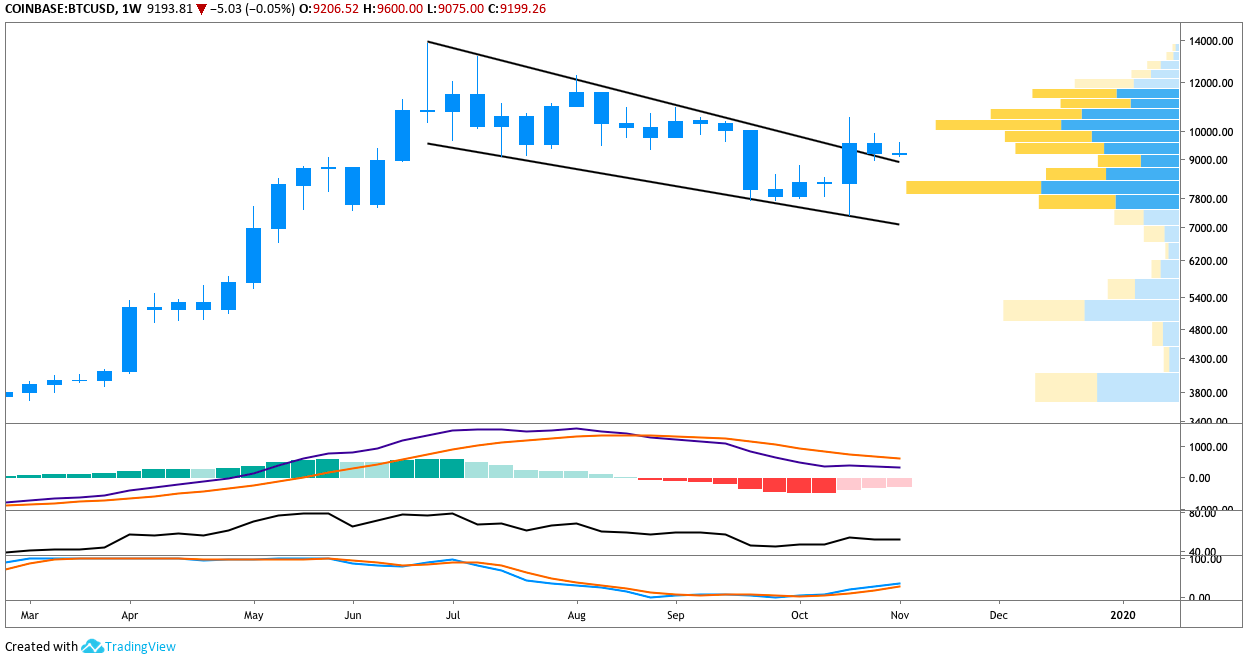 As shown on the weekly chart, Bitcoin price is slumping back towards the descending channel and the VPVR display backs up the aforementioned possibility of price dropping to $8,300 if buyers show no interest in $9,100 and $8,950.

Ultimately, the price is in limbo as buyers and sellers attempt to determine an action plan.

Swing traders are likely waiting to open positions below $9,000 and crypto Twitter is rumbling with investors expressing a desire to buy the dip if the price drops to the $8,600 to $8,300 zone.

Readers who stay abreast of Cointelegraph’s technical analysis will probably sigh with exhaustion as the next statement has become rather redundant as of late but it must be said. Situations where the Bollinger Bands tighten, volume drops and the trading range tightens typically signal that a big move is in the making. 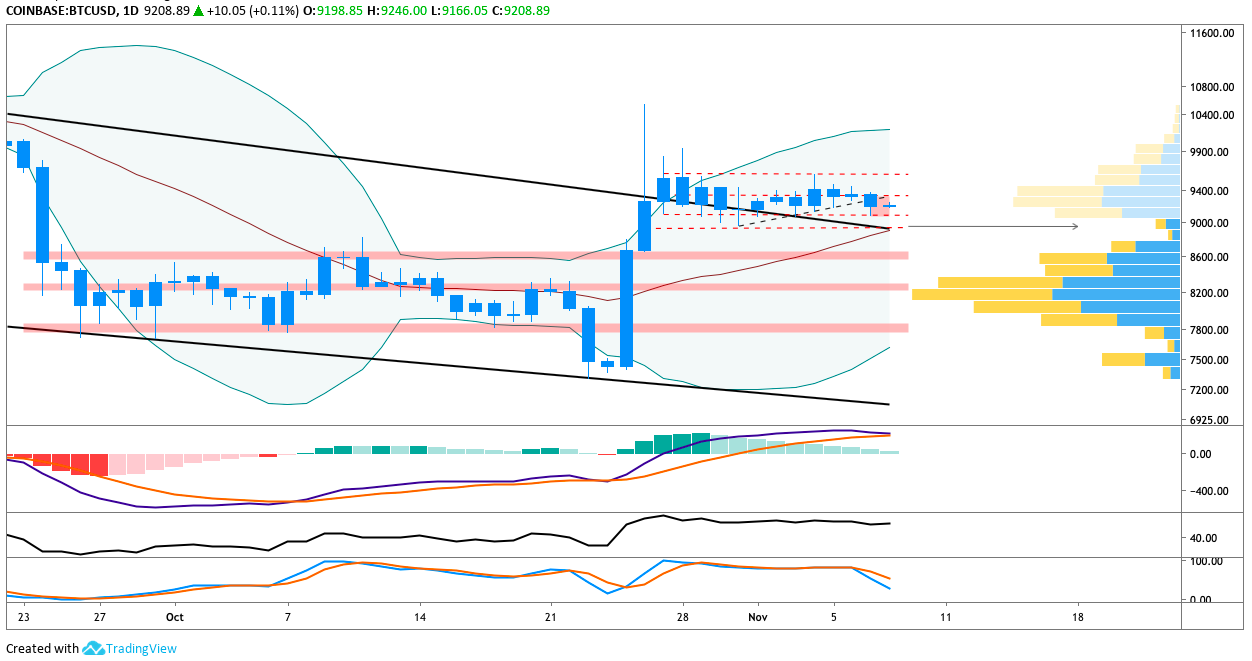 Bulls will fantasize about a high volume spike propelling Bitcoin price through the $9,350 resistance and above the high volume nodes at $9,200 to $9,459. They will look for a 14-day higher high to be marked at $10,150, which lines up with a high volume node on the VPVR and the upper Bollinger Band arm.

Meanwhile, if they haven’t already gone short, the bears will look to open positions at $9,300 and ride a downside break to at least $8,950 where a stop near the descending channel trendline and 20-MA of the Bollinger Band indicator lie. After taking some profit at this point, bears may look to continue the ride down to $8,600, or even $8,300.

Of course, Bitcoin somehow seems to have a mind of its own and often goes against the best wishes of bulls and the machinations of bears. Traders will also recall that November is historically a high performing month for Bitcoin, a point which Blocktown Capital managing partner James Todaro recently emphasized on Twitter. 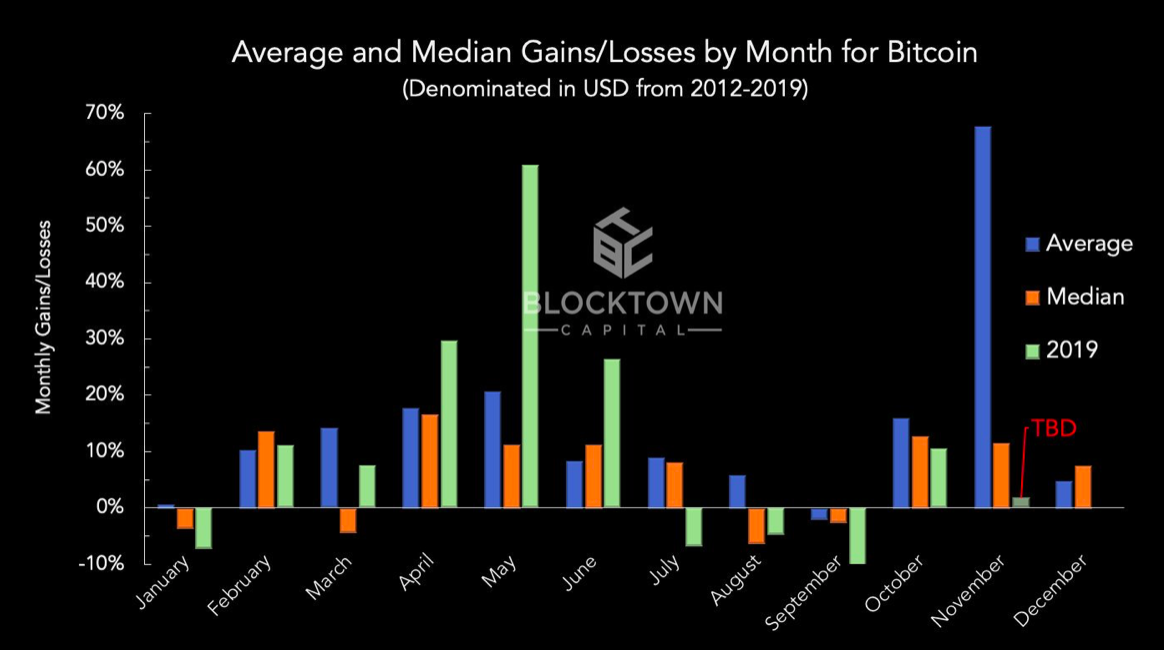 Todaro tweeted the above chart and said:

“November has been historically one of bitcoin’s greatest performing months dating back to 2012. November 2018 was the main (and memorable) exception. BTC is presently up only 1.5% for November 2019…What will the next 3 weeks bring?”

The views and opinions expressed here are solely those of the author (@HorusHughes) and do not necessarily reflect the views of Cointelegraph. Every investment and trading move involves risk. You should conduct your own research when making a decision.

How Not To Lose Everything During the Bull Run

Surging Interest in ‘Yam’ Yield Farming — But Is It Too risky?

NEAR Token Sale Postponed After CoinList Is Overwhelmed by Demand